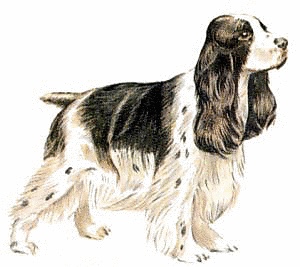 They just didn’t seem to want to stick around.

There was Wally, the duck. He took up residence in the yard, probably because we threw him bread, but he flew south before long.

There was the snapping turtle. I was forced to free him before he lived up to his name and snapped off my finger.

Once, I bought two fish from Wal-Mart. They went belly up in no time flat. A goldfish I won with a fastball at the fair met the same fate.

We gave away a hampster. When a little gator found the pond behind the house, the game warden told us to throw rocks at him so he’d get lost before he got big.

The gator wasn’t a pet, but it’s an automatic highlight when a young boy gets a free pass to throw rocks at something.

I suppose you could guess where I’m going with this story from the title of this post, but you’d be only half right.

I don’t remember exactly how old I was when I got Bucky, and I have no idea where I got his name.

He was a black ball of fur with tan spots around his eyes. I held him by the scruff of the neck a lot, like his mama would’ve.

He probably got tired of it, but he grew into a playful puppy.

My family wasn’t too quick to heed Bob Barker’s advice to help control the pet population, though, and one day Bucky was nowhere to be found.

I reckon he answered the call of the wild.

Later, my friend’s dog had puppies. I got to choose one, and it didn’t take long.

I knew which dog I’d take home the second I saw her.

She was the runt of a litter of spaniels. She had brown eyes, long ears and rickets.

I was repeatedly advised to pick another puppy, but I’d made my choice and I wouldn’t budge.

Maybe I related to the wobbly way she walked. I don’t know.

She came home with us, on borrowed time.

My dog’s coat was curly and white with big, brown spots. I’d seen spots like hers before on a cow, which is what I called her at first.

I was young, but I already knew cow was a terrible thing to call a girl.

I changed her name to Lady, and I think she appreciated it.

For a time, Lady walked around pretty well on her wobbly legs.

Eventually, the wobble got worse. It became a chore for her to stand, and a Herculean task for her to walk.

I should have put her out of her misery then, but I was a boy who’d seen “Old Yeller.”

I couldn’t do it.

One day, I watched Lady hobble around the corner of the house.

It took her a while to reach where I sat. Her legs shook worse than ever, and she was slow, but she made it.

She rested her head on my knee, and I patted it before I went inside.

Lady must have known her borrowed time was up.

I saw her after school the next day. She was streched out in the flower bed next to the front porch, lifeless.

We buried her in the corner of the back yard.

I tried not to cry, but I cried a little.

Looking back, it seems like the least I could have done for a dog who walked all of those steps on wobbly legs just to give me a proper goodbye.

One thought on “Dog gone”