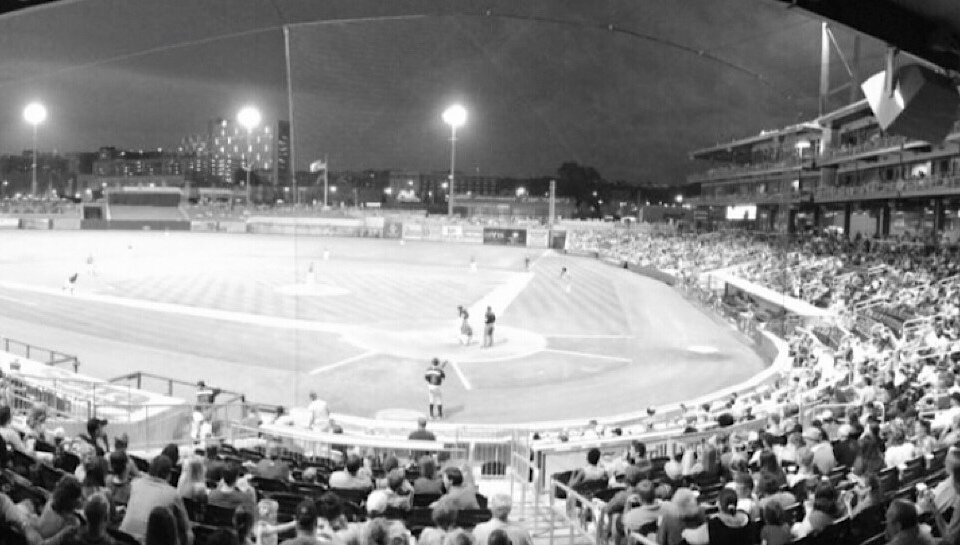 The first day of my trip to Birmingham was great, and it provided me with an opportunity to do something I don’t normally do.

For most of the nearly five years I have been employed at the paper, I have been a sportswriter.

There are a lot of dos and don’ts in sportswriting, but two of the most widely-known are a sportswriter must always strive to be objective and he or she is not allowed to cheer in the press box.

During the time after a sportswriter enters the press box to cover a game and before the game starts, he or she will usually hear an announcement like this:

“This is a working press box. Cheering, for or against either team, will not be tolerated.”

Yesterday, however, I wasn’t sitting in the press box. For the first time in a long time, I was a fan.

Before we get to the game, here’s a short rundown of the rest of the day.

It was called the Train Wreck, and topped with macaroni and cheese. It was huge and delicious. I was overly full when I left, but I pressed on. 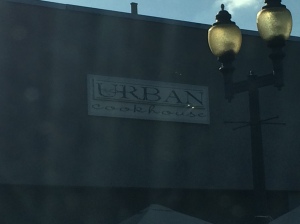 After supper, we started to make our way toward Regions Field, where the Birmingham Barons make their home.

The Barons are the Chicago White Sox Double-A affiliate.

The team has a long and storied history, part of which includes Willie Mays’ stint in center field while he played in the Negro Leagues for the Birmingham Black Barons. The Black Barons played at Rickwood Field, which opened in 1910 — two years before Fenway Park opened — and is the oldest ball park in America.

Birmingham won the Southern League Championship last season, but has limped to a 33-46 record this year.

The Barons are now 4-5 since the All-Star break, but Kevin Ricks — who is a great usher at Regions Field — believes they can turn things around in the second half.

We drove around looking for a parking spot for a while, but were eventually ushered into the VIP lot behind the right field foul pole.

Regions Field — which opened in opened last year — is a great minor-league park. It houses 8,500 seats and plenty of modern technology. 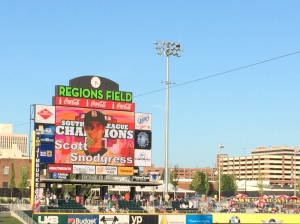 The video boards and sound systems only add to the spectacle of the game, which was classically showcased last night.

For the first time in my life, I had a close view of home plate during a professional baseball game.

Our print-at-home tickets were $12, and the second deck provided an overhead shelter when a rain shower started in the bottom of the sixth.

We bought a program for $1, which included a scorecard and instructions for a really confusing way to keep score.

My brother-in-law wanted to try it, but we didn’t have a pen so we just watched the game.

The first pitch breezed across the plate at 6:48 p.m. My sister outfitted my new phone in a bright pink case to protect it since I didn’t want to buy one at the store so I was a little hesitant to remove it from my pocket, but I took pictures anyway. 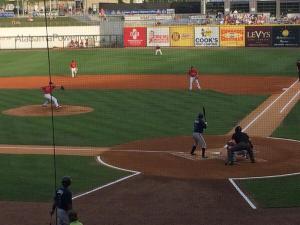 We talked and cheered for the rest of the game.

As is true for most sporting events, there was one especially loud fan who expertly heckled the umps and opposing players.

I must admit I did get a laugh the time one of the Braves — who happened to be wearing very baggy breeches — walked on four pitches.

The fan loudly complained of the plate being crowded by the batter’s pants.

We enjoyed all of the races between innings. There was an especially exciting one between a taco, a hot dog and a chef.

The hot dog upset the chef in the final stretch to win. I was informed the taco was slow, and that was true. It lost by half of the foul territory in right field.

The Barons also lost 5-4 to the Mississippi Braves, but we saw two marriage proposals — both were accepted — two diving stops worthy of Web Gems and two home runs. 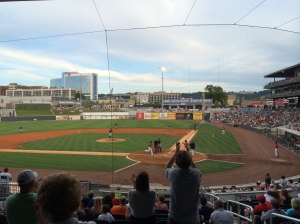 When the game was over, the Barons gave away a $4,500 diamond they previously buried somewhere in the infield.

After about 30 minutes and three clues, the hundreds of women who flooded the field with little plastic shovels never found the treasure and the winning name was drawn from a box.

We made our way out of the stadium, which was well lit when we left. 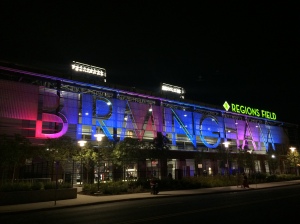 It was a long day from the time we left home until my head hit the pillow on the couch in my sister and brother-in-law’s  apartment, but it was great being a fan again.

One thought on “I’m just a fan”